The development of Alcoholics Anonymous in Melbourne, Victoria was initiated by a chance encounter between a Hollywood movie star  and a Melbourne in 1947.

In her autobiography, I’ll Cry Tomorrow (copy at AA Victoria Archives), Lillian recounts that in 1947 she was working at Melbourne’s Tivoli Theatre. Following a radio broadcast, during which Lillian declared her AA membership, she received numerous requests for assistance from alcoholics and their families. Fortunately the Tivoli management granted her leave to attend to AA matters. Initially this was in Melbourne and the Melbourne Group of AA was established at this time.

She would become the first celebrity to associate her name with Alcoholics Anonymous, putting a well-known face on the disease while doing her part in helping to remove the social stigma.

Here is an Excerpt from the Personal Recollections by the Rev. Gordon Powell, minister of Scots Church, Collins Street
“When a young minister arrives home at nearly midnight to find his wife entertaining a very alcoholic young man explanations are called for.
This is what happened on Tuesday, September 30, 1947. At the time I was minister of the Collins Street Independent (Congregational) Church. The previous Sunday afternoon, along with several hundred thousand other Victorians, I had tuned in to the Wesley Church Pleasant Sunday Afternoon to hear the Hollywood actress, Lillian Roth, then appearing at our Tivoli Theatre, tell the story of how she had become a compulsive alcoholic. For fifteen years she who at 21 had been right at the top of the tree and a millionaire had gone down and down until she had lost everything. She had every intention of taking her own life by hurling herself from the eleventh floor of a New York skyscraper, but at the last moment she was brought into contact with Alcoholics Anonymous. She had found the answer she needed and was now busy rebuilding her career. Also she was anxious and willing to share the secret with any others suffering the agony she had endured for so long.
Although AA was a new thing to most listeners that day, I already knew something about it. I possessed one of the few copies of the Big Book then in Australia. My father-in-law on a visit to America had been impressed by it and thinking it might help me in my preaching and counselling work had sent it to me. I had preached a sermon out of it, but my interest was still academic at this stage. I knew a group had been formed within the Brotherhood of St Lawrence and I had had a telephone conversation with the non-alcoholic ‘shepherd’ who was trying to guide a little handful of hopeful ‘customers’ mainly from what he had read about AA. They were very sincere, but frankly they were not getting very far very fast. Even so to them belongs the honour of pioneering AA in Victoria.
As I listened to Lillian Roth, I realised that here was one who was speaking with power because she was speaking directly out of her own experience. At the same time I thought nothing more of it until late on Tuesday night when my wife and the young man both began explaining what he was doing in our home at such an hour.
Harold, after a tragic childhood spent mostly in an orphanage, had ‘acquired the problem’ and had suffered for fifteen years, the same period as Lillian Roth. He had gone to Wesley Church in person and had been so impressed he made an appointment to see Lillian next day. On the Monday he was too drunk to keep the appointment and was still in some ‘wine shop joint’ on the Tuesday night. He had decided to contact me and ask me to see that he got to the Hollywood star. As I was out addressing a meeting my wife suggested he come out to the house until I returned home and we could take it from there. I was much later than expected, but this meant my wife had heard Harold’s story in great detail and was anxious to help him. Next day Harold, still very unsteady on his feet, was weaving his way along Collins Street with a clerical collar beside him. As we entered the stage door of the Tivoli Theatre some chorus girls were amazed to see a ‘dog-collar’ in their midst. During the next hour I sat fascinated as I heard Lillian Roth talk to Harold making it clear “I know exactly how you feel, I’ve been through it all, but if I can beat it so can you”. If ever I saw hope being reborn in a human soul I saw it reborn that day. I was so impressed that I asked Lillian Roth and her husband, Burt McGuire, to speak from the pulpit of the Independent Church after the evening service the following Sunday night, October 5.
In the meantime, a weekly newspaper came out with posters and the headline, BOOZE AND BALLYHOO: TIVOLI STAR’S LIFE. The article itself could have been worse, but the headline made the whole thing look like a cheap publicity stunt. It upset Lillian Roth so much that those close to her were afraid she might ‘break’. I remember rushing through a night of teeming rain to see her at the Tivoli again and to assure her that this made no difference to our invitation. We sometimes say, “In the Lord’s work every biff is a boost” and this certainly proved true in this case. It was wonderful publicity really and the Sunday evening attendance jumped from eight hundred to one thousand two hundred the night Lillian and Burt came. Most of the chorus girls were there, dressed rather differently. Quite a few potential members of AA were also present.
In this way I found myself the ‘non-alcoholic, non-anonymous shepherd’ of what came to be called the Melbourne Group. Because they could not get anywhere else to meet we lent them the minister’s room in the Independent Hall. That was their base for the next two years and in that period we saw hundreds ‘get on the program’ and new life return to many who had been hopeless and to families who had been facing hell for years.” 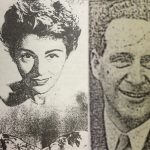 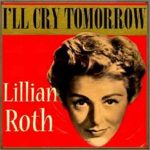 The Oakleigh Group is one of the oldest AA groups in Melbourne, Victoria, Australia. This image was originally shot on slide film; it has since been converted to a digital file. The image was taken circa 1950’s. The Oakleigh Group still meets in Drummond Street, Oakleigh. The image not only depicts a moment in time prior to an AA meeting but also illustrates local culture of the day in the 50’s of Melbourne, Australia. Click on thumbnail picture. 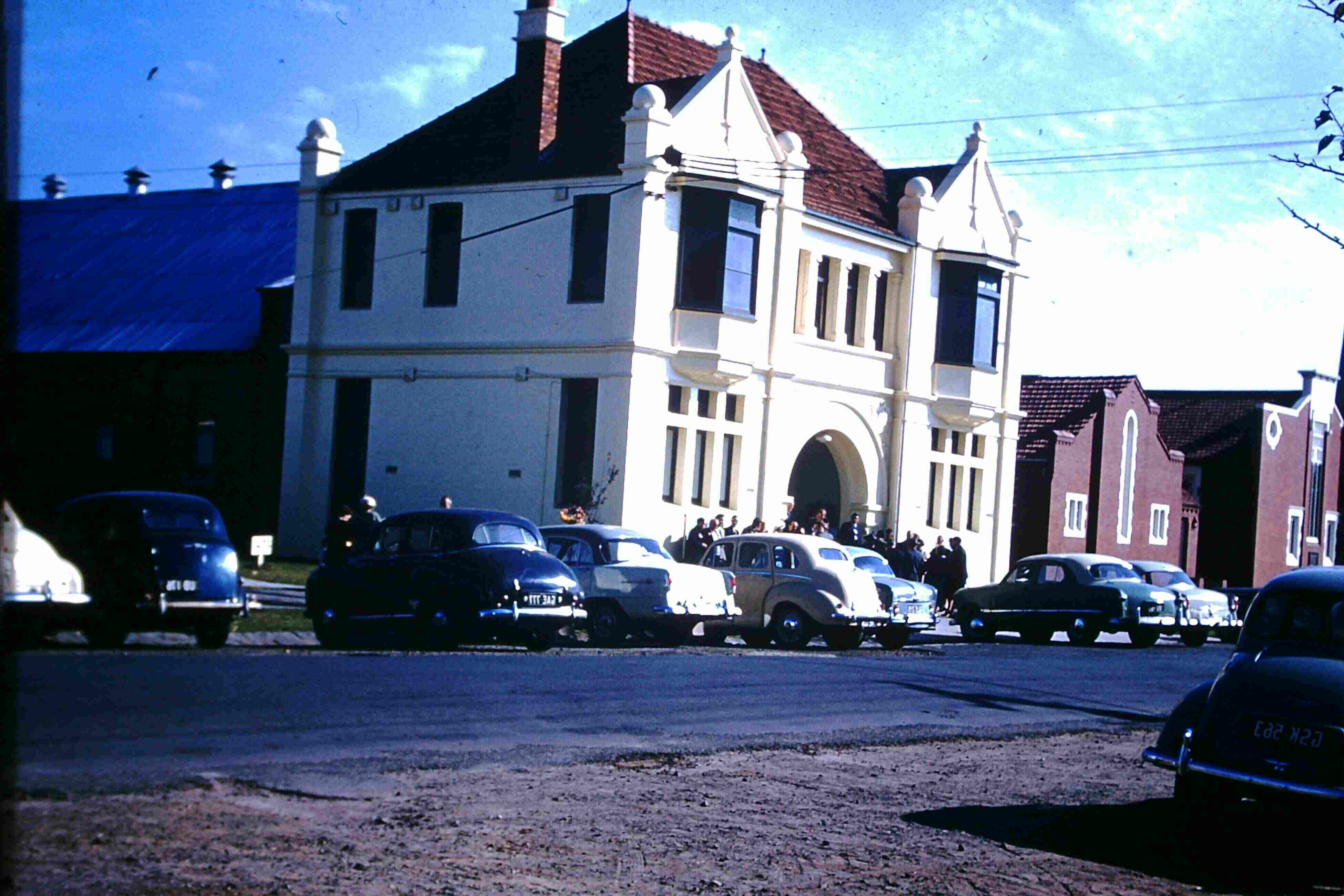